The limestone of the Dogger, called Limestone of the Great Oolithe, outcrops in the summit part above the vines of the Steinkesselreben of Rorschwihr not far from the German cemetery. It is a compact limestone, yellowish-white, with small rounded grains (oolites), very characteristic; We find, at several levels, spicules of sea urchins, corals, oysters, brachiopods, encrines, pentacrines, hexacoralliaries or Ammonites. This limestone formed in rough and warm waters, therefore shallow, is called oolitic limestone. These stone eggs, or aggregates of small limestone grains whose center (nucleus) is a debris (quartz grain or organism fragment), around which thin concentric limestone layers (cortices) are formed, can be called pisoliths if the spheres exceed 2 mm, which is the case here.

In the Steinkesselreben, these very typical limestones are reworked on their surface more or less deeply and the elements rolled into pebbles in the Tertiary era belong to “limestone and inter-stratified marl conglomerates” elaborated from the Priabonian to the Rupelian and partially colluviumed more or less deeply. by limestone marls with grypheus.

DISTRIBUTION OF VARIETIES AND / OR BLENDINGS PLANT ON THE TERROIR : Pinot Grey 60%, Gewurztraminer 35%, Riesling 5%

This locality has known mainly two owners: The Convent of Sélestat which mentions it in 1348 for its vines located in Rorschwihr, and the monks of Moyenmoutierwho cultivate vines there. The etymology of this vintage, “heap of pebbles covered with vines” recalls the scree that the monks formed to be able to use the vines. The latter have disappeared because these materials were used for the manufacture of enclosures of 1.20m to 1.70m high of the eight localities out of the 12 of the village, historically called “canton of Steinkesselreben” or “canton of…” followed the name of the locality. The burrow in the church of Rodern, renovated in 1531, provides proof that the wines harvested from vintage were considered noble cru by the inhabitants of Rodern.

This closed landscape terroir does not benefit from the rays of the sun in the morning, but benefits from the sun longer until dusk since there is an opening of the landscape to the West because the mountains are preceded by a double valley. The topographical imprint of this cru has a very strong influence on the evapotranspiration of the soil and the plant. The mask caused by the Butte du Grasberg and Altenberg de Bergheim anile daily the power of solar radiation at the zenith. This situation, combined with the clayey marls, favors a growth and a jerkiness which continues after dusk. This terroir, located rather at altitude, allows the emergence of mineral-rich water sources, which come from the mosaic of fractures in the Ribeauvillé fracture field; which caused in this sector a reverse sedimentation of the geological ages. 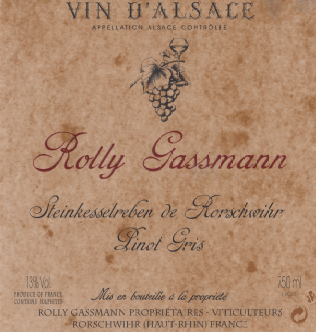 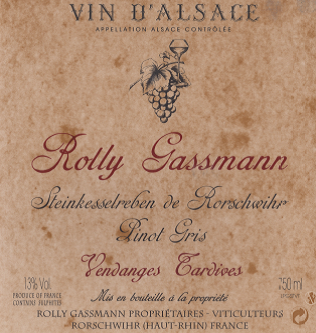