Municipality located north of Rorschwihr operating a wine-growing area of ​​… hectares. This town has the particularity of being on a blue marl granite soil, soil present only in 5 places in France including Rodern, Ottrott, Marlenheim, the lower Pivarnont, Pommerol and the Pommerol language. She owns a grand cru Gloeckelberg de Rodern and a place called Blanckelberg. The municipality of Rodern is located at the foot of Haut-Koenigsbourg and it was once the separation into Upper and Lower Alsace by a stream called the Eckenbach which extends along the municipality of Rorschwihr.

The Gassmann family has been from Rodern since 1611. Currently in this town, we mainly use the Pinot Noir grape variety, which produces red, complex and structured wines with the particularity of having slightly hard tannins in their youth followed by an enchanting silky feel. 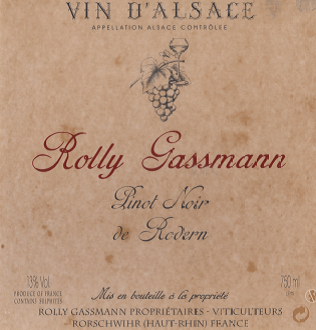