Staircase of the vineyard – Cited from 814

At the southern end of the Stegreben de Rorschwihr, the oolitic limestones of the Dogger emerge which are at the origin of the geological terroir of this locality: these are the interbedded conglomerates and marls forming a piedmont glacis at the edge of the ditch. rhenish. They testify to an active denudation of the reliefs, the coarsest products of which are deposited in the form of deltaic fans, in the open air or under a certain slice of water, on the edge of the Rhine ditch. The hardest materials, from the hinterland, have been preserved in the form of pebbles, the size and roundness of which testify to the distance and the intensity of transport in the continental environment. These are mainly limestone pebbles from the Grande Oolithe du Dogger which then covered the Vosges landforms. These strata, once eroded, it is the limestones and sandstones of the underlying Lias which provide the pebbles. The marls interstratified with the conglomerates form a more or less clayey matrix of yellow-orange marl from the same geological formations as the pebbles. Their original color has changed through oxidation and some ferruginization giving reddish or greenish tints, both to the matrix and to the pebbles. The clay matrix of the Stegreben of Rorschwihr is less compact than that of the Kugelberg of Rorschwihr or the Grasberg of Rorschwihr given the lower topographical situation of the Stegreben where the fine and loose elements were concentrated more. The fossils encountered are relatively altered; these are faunas from the reworked lands (which allows a certain stratigraphy to be made in these deposits). The same is true for the microfauna (foraminifera, ostracods, charophytes) which is preserved in marls and clays where illite dominates kaolinite and traces of altered smectites.

DISTRIBUTION OF VARIETIES AND / OR BLENDINGS PLANT ON THE TERROIR : Gewurztraminer 85 %, Pinot Grey 5%, Muscat 5%

SOME FOOD AND WINE PAIRINGS:

This locality enjoyed the same prestige as the Oberer Weingarten of Rorschwihr due to the fact that it was joined to the latter by certain owners such as, for example, the kings of France (see history of the vines of Rorschwihr). We know that Louis le Pieux, in 817, owned vines there. As early as 1348, its wine was sold under “Stegreben” by the Silo de Sélestat which, in 1530, had the opportunity to expand its property on this cru, part of which previously belonged to the Sainte Catherine de Colmar convent. Among the illustrious owners of the past, we must mention the noble families Rathsamhausen (1478), Habsbourg (1313), Chamlay, Sigfried, Godefroi … From the etymology of the name, historians believe there may have been a connection with Roman exploitation. The eastern side is still partly delimited by a wall. Its west side is naturally delimited by the topography which gives it its name, the translation of which means “Staircase of Vines”. This vintage is still claimed and marketed every year; This wine is notament renowned for its remarkable gewurztraminer its reputation mainly based on the reputation of the “Cuvée Anne” (until 1985) then the “Cuvée Anne-Marie ”(after 1985) every year with more than 70% of noble rot so we have on the labels the name of the vintage and this mention; the other years with 40% to 70% noble rot there is only under Stegreben de Rorschwihr. It is marketed by two marketers from the municipality and exceptionally by a cooperative cellar. Completely anecdotally, it should be noted that it was already mentioned under the heading “Grand-Cru”Even before the 1975 delimitation (see the 300 harvest declarations of Rorschwihr which mention the 12 localities. It should be noted that Rorschwihr only has 5 workers, 2 of whom do not have vines in the 12 localities of the Municipality, the other winegrowers being either cooperators or vendors of grapes).

The Rorschwihr Silberberg backs onto the start of the sub-Vosges hills and is located on the edge of the Vosges fault to the west where the declivity of the Rhine ditch was impressive.

The watersheds for millions of years were between Rorschwihr and Saint Hippolyte. These strong runoffs of acid water from the granite have partially or totally decarbonated the Muschelkalk, hence the presence of a much steeper slope than in the other soils of the village. This peculiarity of the soil, subsoil and topography strongly influences the accumulation of solar energy by a natural loss of radiation, thus the growth of the plant of the vine is shorter and the maturity of the grape slower. On this terroir, this toponymy combined with a siliceous soil amplifies the phenomenon of ascending and descending winds between sunrise and sunset, although the mountain belt, Schlesselstein, Taennchel, Haut Koenigsbourg protects this sector from the north winds, from West and South-West and which favors the stability of acidity on this terroir. 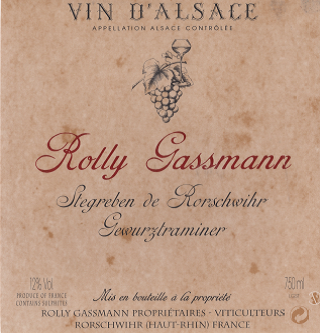 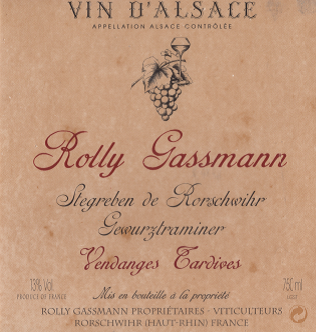 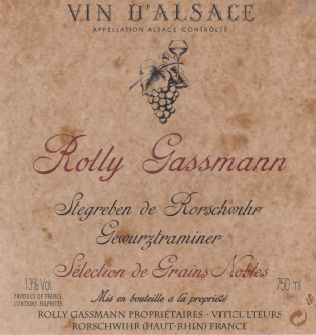